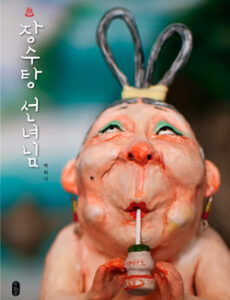 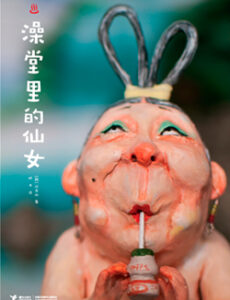 Q. Tang Ling
When working on this book 〈Bath Fairy〉, we had a heated discussion about the unique illustration style of the book. I wonder how it was like for you when you worked on this book. Questions I want to ask to you, the Korean publisher are. First, what was your reaction when you saw the pictures of this book at the first time? Did you think the illustration style is too challenging for the children? Or you are very confident that the children would definitely love this special style?

A. Woo Jiyoung
Hello, I am Woo Ji-Young, an editor-in-chief at BearBooks, a children’s book publisher in Korea. You said you had a heated discussion when you started working on the book 〈Bath Fairy〉.
I know that Maurice Sendak’s 〈In the Night Kitchen〉 – its child protagonist was in the nude – caused much controversy when it came out to the world for the first time. Even more, an adult woman appeared naked in the children’s book! It can be an absolute shock for the people, I believe. However, it was not that shock for us since we met the book in the format of a dummy book made the author herself. Rather, we felt a great sense of liberation in the candid expression of a woman’s body that we see in our real life. Not only Korean society but the whole world seems to have such an idealized standard for a woman’s body. In the reality, however, a woman’s body which we meet in our real lives, especially of those after giving birth and getting aged, is far from that of an idealized standard. So we liked very much that the book showed the body of a common in a very candid way and even that body looked beautiful. When we see the scene of the fairy swimming in the water with Dukji on her back, we feel very free and even beautiful, just like watching a dolphin swimming. We were sure that parents and children would also feel quite the same as we felt. We also found it very attractive to see a child and an elderly, regardless of age, having fun and communing with each other even in being naked. We were pretty sure that children would also love this story, in which the little goodwill they give would return with a small miracle.
Actually nakedness was not the problem in Korea, instead, there were some children saying the fairy on the cover was rather scary. The fairy has thick makeup and a rough face, so she looks a bit scary. But after reading the book, all the children seemed to like it beyond that fear. Adults were not much different. For instance, one of my acquaintances said that her husband, whenever he was depressed or had a hard time outside, he would take this book and read it quietly alone, and a bit later he would come out with a slightly smiling face.
When I visited China regarding the promotion of 〈Bath Fairy〉, I heard the public bath culture had almost disappeared in China. I really appreciate for the insight and courage of Jieli Publishing House for publishing this radical book which contains a very strange foreign culture and also the naked body of an adult.

Q. Tang Ling
Do you have any interesting story to share when you worked on this book with the author?

A.  Woo Jiyoung
This book 〈Bath Fairy〉 means a lot to BearBooks. It’s because it was our first book to work with Baek Hee-Na, and all staff from Bear Books made this book together. 〈Bath Fairy〉 was pictured in an old public bathhouse in Gyedong, Seoul, Korea. It was so difficult to find a small but real bathhouse that fits for small dolls since it had to be for taking pictures with dolls in a real bathhouse used by people. Both the author and we, whenever we had free time, went around the local public bathhouses to find a suitable place. We had to see not only the women’s bath but also the men’s, so a male employee of our sales department would take a Barbie with him to the men’s bath, and take pictures and send back to us. He chose the very very early morning hours to keep out of others’ eyes. If anyone ever saw him with Barbie in the bath, he must be thought a strange person, right?
After finding the right bathhouse location, anyone including me, an editor, even the head of our design team, we all worked as staff to photograph the scenes of the books together. We still clearly remember… the memories of holding the reflector, holding the lights, setting up together, and everyone sweating in the hot bathhouse from late spring to summer!

Q. Tang Ling
How did you promote this book to the children? Any special experience to share?

A. Woo Jiyoung
For 〈Bath Fairy〉, what we continued to strive for while working with author Baek Hee-Na was to publicize the author’s name rather than having special promotions. At that time, there were not many Korean authors who were remembered by name in Korean children’s books. In adult books, there are readers who look for books under certain authors’ names, however, in the case of children’s books, people seemed to remember by book’s name not by author’s name. So, since we released 〈Bath Fairy〉, we set up a display rack named after the author in order to make the name of Baek Hee-Na known. And we did advertisements focusing on the author’s name… We, in deed, put a lot of effort into making the author known. So now, there are many readers who remember the name Baek Hee-Na, and they are willing to buy whenever a new book by Baek Hee-Na is published.
〈Bath Fairy〉 was turned into a musical and hit the big time, so recently the book got a new cover with a picture of Dukji and the fairy diving since the original one was old enough. We also conducted various promotions together with musical producers.

Q. Tang Ling
I think that Korean picture books have made rapid progress particularly in recent years. Young writers have been constantly produced, and they have won international awards many times. The overall storytelling and artistry of picture books have been greatly improved. Could you please share with us your experience in discovering and cultivating new picture book writers?

A. Woo Jiyoung
In Korea, once many schools and academies sprang up for teaching picture books. The desires of writers to write and draw picture books were growing, but there was no other place to learn them. Therefore, authors and designers and editors got together to make such places for nurturing and finding new writers. That led writers accumulate their abilities for creating picture books, I believe. Myself, I spent about two semesters looking over students’ scripts at Hankyoreh Picture Book School once. In that place, I discovered one writer, whose name is Yoo Seol-Hwa, the author of 〈Super Turtle〉 and 〈Super Rabbit〉, steady sellers in Korea.
In some cases, publishers organize workshops to train writers. If there is a special project like making an old story picture book or a poetry picture book, then the publisher gather writers who fit the project to make them study and to make books together. Or, the publisher organizes a workshop to nurture writers who can purely create works.
Now in Korea, writers and editors who grew up reading picture books in their childhood, started to work in the publishing industry. As the number of such people increases, the ability to create picture books also increases. However, until such competencies are accumulated, writers, editors, and designers should study together and make efforts to nurture rising writers, I believe.