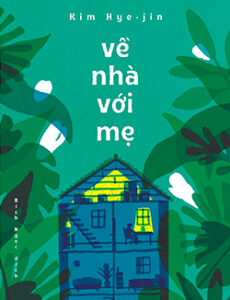 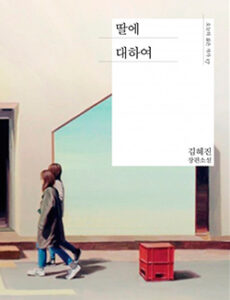 Q. Nguyen Ha Linh
Didn’t you have any hesitation in editing this book because of the topic covered in this book? As far as I know, Korea is still not open to the gender and sexual minority communities, so I thought you might have been reluctant to edit a book on this subject.

A. Park Hyejin
Hello, I am Park Hye-Jin, an editor of Kim Hye-Jing’s 〈About my daughter〉 at Minumsa. Now I am going to talk about the various feelings and experiences I had in the process of and after publishing the book.
For literary works, it seems not necessarily have one-to-one correspondence between what the book says superficially and the ultimate thematic consciousness that it wants to convey. Novels seem more direct though… This book 〈About my daughter〉, on the surface, talks about the relationship between a daughter who is a sexual minority and a mother who sees the daughter. But if we see the other side of the story, it seems a story about new community, or a family formed by people who are not included in the normal family. Or it can also be a story about different paths of life experienced by women who have to take responsibility for themselves without anyone else taking responsibility. So I didn’t edit the book only by focusing on the material superficially expressed as a sexual minority. And in the same context, I didn’t worry about how this book would be accepted in Korean society either while working on this book.
It is important to understand the thematic consciousness that this book is talking about through the material. In order to convey the thematic consciousness, I focused on how to convince people of the story, the structure of various conflicts, or situations. Since I thought I could convey some points of argument (not controversy) or discussion clearly enough, I would say there was no hesitation in publishing the book in that aspect, which you are curious about.

Q.  Nguyen Ha Linh
Did you expect readers would accept this work without any hesitation? And how did you feel when you received such a keen interest from readers?

A. 박혜진 Park Hyejin
I don’t think works that are accepted without hesitation are necessarily good works. Some books are readily accepted by the public and give readers immediate comfort or are enjoyable to read, while some books are somewhat uncomfortable but have literary value with a certain truth that must be accepted.
Kim Hye-Jin’s 〈About my daughter〉 seems to have some uncomfortable points. I agree that in the consciousness that the mother has about the main character “Green” and her lover “Rane”, there are some uncomfortable points as you are concerned. However, it seems that those uncomfortable points contain all the deceptive or contradictory thoughts and ambivalent feelings we have about a certain minority tangled within us that we cannot deny. I think this book is asking if the point, that one cannot accept the diversity of other people’s lives as they are, is something that happens only in the mid of a person or it is a common limit that our community has. (When it come to other people’s lives, it is tolerantly acceptable, but it becomes a different story when it is directly related to oneself.) And is also asking where the limit for oneself is, compared to that critical point. For that reason, it cannot be accepted without hesitation. But this 〈About my daughter〉 is a work with literary value because there are points that have to be accepted even with hesitation. And I think this book make us experience the courage the author takes to talk at those points.

Q. Nguyen Ha Linh
This book is written from the perspective of a relatively conservative mother who is not easy to accept new thoughts. So on many occasions in the book, the mother expresses sexist thoughts and makes very harsh comments that may hurt readers in the ‘LGBT+’ community. In this regard, were you not conscious of the editor’s kind of self-censorship to soften the mother’s discriminatory lines and thoughts while editing the work?

A. Park Hyejin
I think one of the joys of reading a novel is the changing process of a character from the story, and it can be quite the same for any genre that has the form of a story. It can be called growth, and the aspects of growth are very diverse. Witnessing the changing process of the character, from the beginning to the end, is one of the great pleasures of reading a novel.
As you can see from the title 〈About my daughter〉, the story of a daughter is seen from a mother’s point of view, and the changing process of the mother is very important in the book. That is why the changing process of harsh thoughts that the mother had about her daughter at first and the thoughts she had about the sexual minority, is very important. Of course, it is not that her initial thoughts and her attitude toward her daughter at the end have been completely changed though, she has gone through from denying and neglecting to not doing so, and she stands together in front of violence in the lives of minorities. In this process, the way she sees her daughter and the daughter’s girl friend is changing by experiencing how her stereotype or prejudice turn into violence in their lives.
This changing process is a very important development in this novel. Therefore, changing the tone of the words that express the attitude and feelings before the change, to a softer tone simply because that may hurt the people in that group, is not the way to effectively convey the theme that this book wants to talk about ultimately, I think. When reading a novel, it is important to see the aspects expressed, but it is further important for the editor to see and judge what kind of story it wants to say, what consciousness and theme it wants to convey, and what is needed to convey the theme. If something is unnecessary, the censorship process needs to be activated to control the level or to prevent anything unnecessarily causes hurts. If not the case, the censorship may hinder to convey the thematic consciousness. I didn’t take any of those points from 〈About my daughter〉 – the prejudice against sexual minorities that the mother has – as the subject of any censorship or editing..
It was important for me to judge how much the mother thinks differs from the sense of the times. I thought the level of thinking that the mother has is not that different from the collective senses shared by our society – the senses about sexual minorities. And I thought that by becoming more absorbed in mother’s emotions, we actively participate in the changing process of the mother and feel the emotions intact, thus ultimately when closing the last page of the book, we feel many things get changed, get improved. So I remember I wasn’t that conscious of censorship as you were concerned. I hope this answers your questions. Thank you.